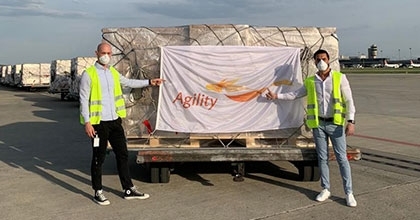 Tarek Sultan, vice chairman and CEO, Agility, said: “We entered 2020 with our business on sound footing, which is one reason that we were able to react quickly to the sweeping impact of the Covid-19 pandemic. We acted immediately to protect employees, customers, and communities, including providing donated logistics support for local governments and NGOs around the world. We also took steps to bring operating expenses and other costs in line with the new environment. If the crisis has demonstrated anything, it is the essential value of logistics and supply chain providers in times of severe disruption.”

Covid-19 had uneven effect on Agility businesses
“Our contract logistics business and logistics parks have weathered this reasonably well because demand for storage space has been steady or increased, especially as customers have looked to add to safety stock or support pandemic-driven increases in e-commerce sales. In many instances, we are experiencing accelerated adoption of disruptive and emerging technologies related to the COVID-19 pandemic or underlying CSR paradigms. Other Agility businesses, such as aviation and airport operations have been directly impacted by the decline in air travel and traffic and are now pivoting towards the development of pioneering new technologies that will be essential to the re-enablement of global travel,” he said.

“Ultimately, we feel that our long-term vision of infrastructure growth in emerging markets, our growing focus on disruptive technologies and digital enablement for logistics, and expansion into new market segments like e-commerce, is more important than ever,” he continued.

Volumes were down in both Air Freight and Ocean Freight in the first half of this year, by 23.6 percent in Air Freight (tonnage) and 14.8 percent in Ocean Freight (TEUs), due to COVID-19 impact on demand due to lockdowns, production stoppages, and economic contraction across industries and geographies. However, H1 saw higher yields in Air Freight due to capacity shortages and a spike in demand for urgent shipments of PPE and other medical equipment. First-half Air Freight net revenue increased 17 percent vs. the same period a year earlier, while Ocean Freight net revenue decreased 16 percent vs. same period last year.

Starting in Q1, GIL introduced a range of both temporary and permanent cost reduction measures in response to the pandemic. The measures are intended to ensure continued strength of profitability performance during a period of falling and volatile global trade activity. GIL continues to focus on operational productivity as well as customer solutions to respond to the changing market environment.

Agility Logistics Parks
Agility’s Infrastructure group EBITDA declined 18 percent to KD 56 million for the first half of 2020. This decrease was driven mainly by UPAC, NAS and GCS entities, which experienced significant declines as a result of the pandemic. In contrast, Agility Logistics Parks (ALP) and Tristar proved to be resilient during the first half of the year. Infrastructure group net revenue fell 8.4 percent and gross revenue declined 10.2 percent.

ALP revenue grew 4.5 percent in the first half amid increased demand for warehousing space, mainly from suppliers of medical equipment and food. ALP also witnessed strong demand from e-commerce players as it is strategically placed to service the requirements of fulfilment providers. ALP accelerated delivery of a few projects to meet customer demand. Developments in Kuwait, Saudi Arabia and Africa are proceeding as planned, despite some interruptions due to lockdowns.

Tristar
Tristar, a fully integrated liquid logistics company, posted a 10 percent revenue decline in the first 6 months. Despite that, Tristar’s contractual business model provided resiliency, allowing profitability to grow by double digits during the same period. The revenue decline in the first half of the year was primarily due to the sharp drop in fuel prices and volume slowdown from COVID-19 pandemic impacting Fuel and Road Transport and Warehousing (RTW) segments. The Maritime segment showed healthy growth due to the deployment of new vessels and strong market demand. With the Coronavirus outbreak, Tristar took measures to ensure no business interruption for its customers. Although uncertainty remains in market, we believe Tristar is positioned us for a successful second half of 2020. Tristar continues to execute and to look for opportunities to unlock additional value for its shareholders.

National Aviation Services
National Aviation Services (NAS) reported a revenue decline of 29 percent, despite performing well in January and February. In March, NAS revenue came under pressure as airlines and airports where it operates curtailed flights and related services, or in some cases, halted operations entirely. Despite the limited operations at many airports, NAS continued to serve evacuation flights, private jets, and cargo freighters. With airport and carrier activity resuming in some locations, NAS is seeing increased demand for its services. NAS’s focus for the remainder of 2020 will be on cash flow, reduction of costs in line with the two-year outlook for aviation, pursuit of new growth opportunities, and adjustment of policies and procedures to operate in a post-COVID world.

United Projects for Aviation Services Company
The pandemic impacted United Projects for Aviation Services Company (UPAC), which saw revenue fall 51.8 percent in the first half due to the cessation of operations at the Kuwait International Airport. In response, UPAC activated its business contingency plan and took steps to reduce the negative impact on its business.